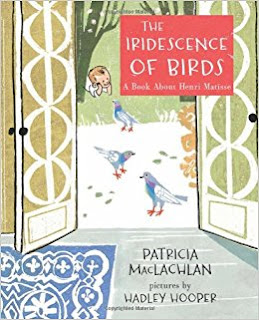 My cousin was once an art teacher. She lived in Montreal and would bring a group of students to New  York City once a year to visit the Metropolitan Museum of Art. She told me about friends of hers who were trying to get their kids interested in art. They would bring their kids to the museum once a week and look at one  piece of art and then leave.

Consider this picture book, THE IRIDESCENCE OF BIRDS: a Book About Henri Matisse by Patricia MacLachlan like a visit to a museum.  It is written in second person, like in this sample:

"If you were a boy named Henri Matisse who lived in a dreary town in northern France...And you wanted color and light And sun,..."

Henri Matisse is a well-known artist. If a parent or teacher wanted to show children a work of art by Matisse, they could go to the Metropolitan Museum of Art, like my cousin did.
Posted by The Swimmer Writer at 10:47 AM No comments:

The Importance of Little Known Stories 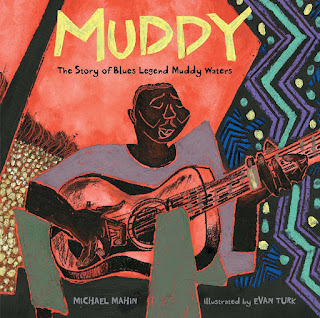 Many people have contributed to the story of America. This picture book biography, MUDDY : the Story of Blues Legend Muddy Waters by Michael Mahin tells the story of one McKinley Morganfield.

"...McKinley did have Grandma Della. She scooped him up and tried to keep him clean and finally just started calling him Muddy."

Grandma Della tried to discourage his interest in blues music. But Muddy did what he wanted to do.

Readers learn how he left the South for Chicago and got his music career started.

I used to hear Muddy Water's music on a radio program called WOODY'S CHILDREN.
Posted by The Swimmer Writer at 9:26 AM No comments: